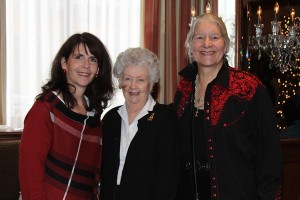 Fox 2 Health Reporter Deena Centofani served as master of ceremonies. She told the audience that she stayed overnight at the Ronald McDonald House of Detroit to be with a friend whose son was hospitalized after a severe injury. She was touched by the House’s staff and volunteers who provided compassion and hope during a parent’s worst-case scenario: the serious illness or injury of a child.

“Being here today means that you are contributing to the nearly 2,000 families from around the world who stay at the House each year,” Centofani said.
“This is the last fundraising event of the year for the House and it is going toward the $3 million expansion campaign,” said Jennifer Litomisky, executive director of the Ronald McDonald House of Detroit. 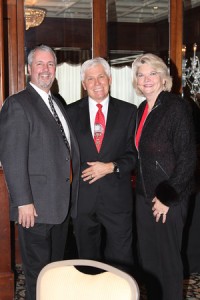 Co-chairs are Treva Beckius, of Grosse Pointe, and Charlene Mitchell, of West Bloomfield, new board members to the Ronald McDonald House of Detroit.

Beckius shared her personal connection to the Ronald McDonald House with the guests. She and her husband Reggie and two of their three sons stayed at a Ronald McDonald House in Wisconsin when her middle son Aaron, then 12 years old, was diagnosed with a brain tumor in 2006.
“We could have paid to stay at a hotel, but we wouldn’t have had the love and support that we got from the staff and volunteers at the House,” she said.
An inspirational video told the story of former resident Rachel Skousen, of West Bloomfield, who called the House a “comforting place with healing grace.” She said, “Our kids need that. It keeps families together.”

Arthur Bricker, owner of Bricker-Tunis furs, said, “Our business has always supported worthy charities and we are proud to support the Ronald McDonald House of Detroit. Our new connection is very special to me personally. My family endured a lot of agonizing times when my daughter, now an adult, was born with a rare and debilitating condition. I appreciate the work that the Ronald McDonald House does to make families comfortable when they have a child who is hospitalized with an illness.”
Blossoms, of Birmingham, donated floral arrangements for the tea.
For guests at the Ronald McDonald House of Detroit, a $10 daily fee is charged for a guest room and use of common areas including a kitchen, laundry room, playroom and entertainment areas. No family is turned away due to a lack of funds.