Ronald McDonald House of Detroit volunteer and Expansion Campaign member, Jason Geisz, First Vice President and Financial Advisor for Morgan Stanley in West Bloomfield started the “Rockin’ Ronald’s Red Sock Challenge” in mid-spring. He and the staff at Morgan Stanley raised funds for the House through Ronald’s red sock sales and other in-house activities and helped to raise close to $5,000 for the House!

Jason didn’t stop there. He challenged the staff at UHY and together
both companies raised funds and awareness for the House. 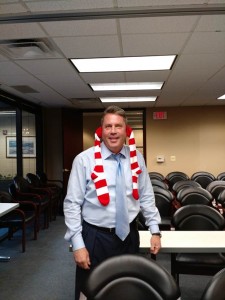 During the weeks of June 15 to June 30, employees from UHY LLP’s Michigan practice in conjunction with UHY Cares, purchased and sported nearly 200 pairs of red and white socks to be a part of the “Ronald Sock Challenge.”

The challenge is both an awareness campaign and fundraiser for the Ronald McDonald House Charities of Southeast Michigan. The certified public accounting firm raised over $3,000 in employee donations in just over a week. 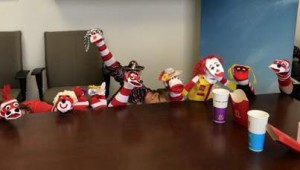 The challenge started as a friendly competition between offices for a good cause. However, because it took place at the same time as UHY’s National Leadership Conference (NLC), the firm turned it into a company-wide event and received contributions from colleagues around the country. Employees at all levels enjoyed “socking” co-workers (pay-it-forward concept), dressing up with their families andsubmitting creative photos to add to the fun of the competition. Bob Potter, president of the mid-Michigan Chapter of Ronald McDonald House Charities, and Tom Alongi, active member of Ronald McDonald House Charities were instrumental to the success of the campaign at UHY. Bob even wore a pair of the socks during his speech at the NLC which resulted in the generous donations from the attendees of the conference. He also personally offered up a cash prize to the winner of the funniest, most creative “Ronald Sock selfie.”

Ronald McDonald House Charities of Michigan has come up with a unique and successful campaign with the Ronald Sock Challenge. The challenge allows for all levels of employees, at any company, to get involved and give back to a great organization dedicated to creating a comfortable “home away from home” living environment for families of sick children during such difficult times. UHY LLP was happy to contribute to the campaign, and we want to thank RMHC of Michigan for the opportunity to participate in such a great cause.

Big thanks to Jason Geisz and the staff at Morgan Stanley and UHY!