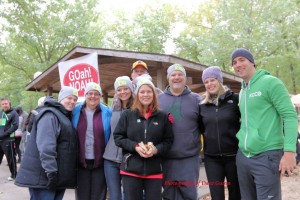 Shelby Township, MI … The 7th Annual GOah Noah! bike ride, walk and 5K trail held Oct. 3 at Stony Creek Metropark drew more than 100 participants, many of whom ran, walked or rode their bikes to help raise $12,000 for the Ronald McDonald House of Detroit.

This year’s event featured therapy animals, including rabbits, horses, sheep, goats and a llama. Horses were brought by Windwalker Farms, of Fenton, which offered pony rides for children and demonstrated horse handling.  Volunteers with the nonprofit organization Horses Heal Hearts of Michigan showed children and adults how to interact with horses. There was a D.J., caricature painting, and several exotic cars, including Maserati and Ferrari. A raffle was held for gift baskets.

Winners of the 5K trail race were Paul Hoste of Clinton Township who took first place at 21:03; and Jack Wexler (Noah’s brother) of Shelby Township who came in second at 21:38. All finishers received a GOah Noah! branded medal on a ribbon.

“GOah Noah! continues to be a fun family event that attracts people of all ages,” said Jennifer Litomisky, executive director of the Ronald McDonald House of Detroit. “The funds received from this event will go toward our expansion campaign – helping provide services to families who stay at the House while their child is in the hospital.”

Renee Sullivan and Bob Wexler, each of Shelby Township, started the event to help parents cope with medical crises by coming together as a community to participate in physical activity, music and games. It is named after their son, Noah Wexler, who was diagnosed with a rare brain tumor, medulloblastoma, at age 9. Now a sophomore at Utica High School, Noah cheered on race participants and greeted guests.

Sullivan, event director and race director, said, “The therapy horses and pets added to the overall atmosphere of the event. Children and adults were able to interact with the horses and other animals throughout the morning. There was also a nice display of classic cars that drew a lot of attention. It was a fantastic fall morning to raise funds for this charity that does so much for families with an ill child.”