Detroit… On the sizzling hot morning of July 18, 2015, 800 participants gathered on Belle Isle for the 7th annual Escape to Belle Isle – Spirit of Detroit Challenge, a 5K and 10K race/walk.

The course was positioned next to the Belle Isle casino, facing west with a view of Detroit’s Renaissance Center and Ambassador Bridge. Runners stepped on a timing mat under a blue arch at the race’s start and made the turn-off for the 5K or 10K at Scott Fountain, whose flowing water was a refreshing scene.

Board member and race sponsor Jenna Greenman served as master of ceremony and called out runners’ numbers or names as they passed the finish line. 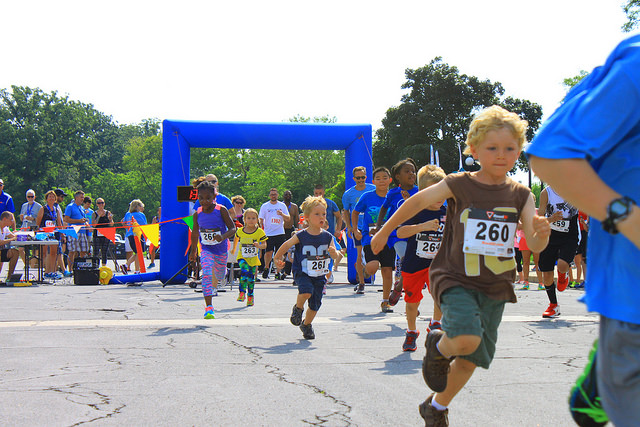 Jenna and Milt Greenman of West Bloomfield, both attorneys who run together as a couple, began the race as a grassroots effort. They saw a void in summer runs in the city of Detroit and decided to change that. The couple is dedicated to raising funds for the Hearts, Hands and Home campaign to benefit expanded services at the new House in Midtown.

Proceeds of approximately $10,000 will be donated to the Ronald McDonald House of Detroit. The race was sponsored by Kitch Attorneys & Counselors, Absopure, Running Fit, and The Thurswell Law Firm, PLLC.

“We couldn’t have been happier with the turnout on a beautiful Saturday summer morning in the heart of Detroit,” Jenna said. “Our racers are truly special to us, and we appreciate every single one who shows up and participates in our race. To have runners come up to me while I am emceeing at the finish line and tell me how much they love the race and all that we do is so rewarding.”

This Article has also been featured in The Detroit Legal News